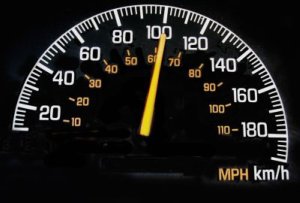 This is a really short post but, seriously, why say “miles per hour” or “once per day” when you can say “miles an hour” and “once a day/daily”?

The “a/an” we see here is not a corruption of “a/an”, but rather comes from the Old English for “on” which was an. It first meant “on (each)”, but in the end the meaning spread from times to measures, prices, places, and so on.

In other phrases, we might feel we still need “per”, but honestly, be brave! We don’t need it! Per annum, per diem, per capita, per se: all Latin. Just use the English when speaking English: a year/every year/once a year/by the year/yearly. And the same can be used of the others, too: a day, by (the) head, by itself.

This entry was posted on Tuesday, June 6th, 2017 at 3:11 pm and is filed under vocab, words. You can follow any responses to this entry through the RSS 2.0 feed. You can leave a response, or trackback from your own site.