This post is a lesson in how hard it can be to think clearly and come up with pithy plain, Saxon English wordforms.

I watched the wonderful film 3096 Days on Netflix last night. No spoilers, but the film featured the word obey prominently. It got me thinking: how would we say “obey” in Plain English?

Now, as far as French borrowings go, “obey” isn’t bad. It’s quite a short word and pretty much obeys(!) the sound structure of English. But it’s not plain English.

Do as you’re told, do what so-and-so tells you to do, follow (after): try to use these and similar phrases when you can.

But what about when we need a shorter expression? What Saxonism could we use?

We could make a phraseword on the analogy of words like wannabe (from the phrase “want(s) to be”). So how about… Tell-do? Say-do? They don’t quite work, do they?

Obey ultimately comes from the Latin meaning “listen to, pay attention to, give ear”. So… Give-ear/ear-give? Listen-do? Forheed? Nice, but I’m not sure they work 100%. 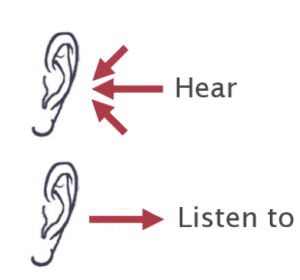 Old English had the great word hiersum ‘hearsome’ (like handsome). Why not use this? Or better still, “listensome”? Why? Because listen is distinguished from hear in that it implies that your attention has been directed, whereas hear just means (passively) taking sound into your ear.

So if hearsome or listensome are the adjective, and the abstract noun would clearly be hearsomeness or listensomeness, what would the verb be? Old English had hiersumnian: hiersum with the verb ending, no longer in English. We could follow other -some words and use a phrase with to be. So, “Obey me!”, would be, “Be hearsome/listensome!” And, “You have to obey your father” might be, “You have to be hearsome/listensome with your father”.

As it happens, the root is the verb. Set side-by-side “He is tiresome” and “He tires me”. But there’s a problem: “hear” and “listen” don’t mean “obey”! Interesting, we say “listen to“, so maybe “listen” alone might be “obey”: “Listen to your father” and “Listen (=obey) your father”.

Maybe hear-listen to emphasise the point. “You have to hear-listen (to)   your teachers”.

…but in that case, I feel myself drawn back to “listen-do”. Do is the key, as obey mean do it, whatever it is. But compare: Obey your father and Do your father(!) No, it’s Do the thing that your father says. Using do changes the desired object of the verb.

We might use the words “hark” and “heed” in some way. Say, “full-heed your father!”. But this doesn’t work for me either.

We often say a word again to emphasise we mean a “real” or “legitimate” version of the thing: “I want to eat food food, not hamburgers” (that is, real, nourishing food); “I’m talking about football football, not American Football” (in a British context, likely meaning “soccer”). So: Listen-listen meaning to really listen, that is, listen and do… AKA obey.

In short, I am struggling to find a Saxon English form which is Plain English enough and which is short. My best ideas in this post are likely listensome (obedient), listen (without “to”) or listen-listen or listen-and-do (obey), listensomeness (obedience).

EDIT: Danny Scwartz left a comment below putting forward “befollow” on the German analog. Not quite perfect, but an outstanding suggestion. Many thanks, Danny!

This entry was posted on Monday, April 17th, 2017 at 10:48 am and is filed under Anglish, vocab, words. You can follow any responses to this entry through the RSS 2.0 feed. You can leave a response, or trackback from your own site.