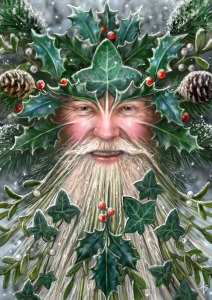 Christmas, Xmas, Noel, Yule. So many names. But why? Christ-mass: that one’s simple enough. “X” is the first letter of the word Christ in Greek (Χριστος), hence Xmas. Noel comes from French, and ultimately the Latin, for “birth” [that is,  of Jesus]. Yule, on the other hand, was originally the name for a heathen feast of around the same period.

Yule is therefore the homeborn English word. And as a non-Christian Englishman, I like to use Yule to consciously stand for the cultural, as opposed to religious, celebration. Why? Because “Christmas” is and always has been about more than just Christianity. Eventually the word Yule fell out of use, except in some dialects, and was brought back to mainstream life in the nineteenth century.

The thought might occur to you: if the homeborn English word yule was replaced, perhaps the names of the months were too. And that’s exactly right. Here’s a quote from the venerable Bede’s The Reckoning of Time.

As you can tell by names like Eosturmonath, these are the words in their Old English forms. I’m not suggesting we replace our current month names with updated versions of the old ones. Threemilch isn’t going to be plainer and easier to understand than May. But I post them for interest sake and because they are our homegrown words.

As you can see, Yule was really a two month long period, roughly December and January, of feasting and celebration. One half before, and one after, the Winter solstice. Respectively these were named, Ere Yule and After Yule. This was coupled with a two month Summer period, one month before the Summer Solstice, one after. Again, Ere Lithe and After Lithe. That’s lithe as in ‘flexible, supple’. September was also known as hærfestmonað: “Harvestmonth”. Winterfilth has nothing to do with dirt; –filth comes from filleth, which is ‘fill’ as in ‘full’, and ‘eth’ as in strength: so, ‘winter-full-ness’.

So there we have it: the original month names in English and the true meaning of Christmas.

Source for Bede’s The Reckoning of Time: https://books.google.co.uk/books?id=yFsw-Vaup6sC&pg=PA53&source=gbs_toc_r&cad=3#v=onepage&q&f=false

This entry was posted on Wednesday, December 23rd, 2015 at 12:09 pm and is filed under vocab. You can follow any responses to this entry through the RSS 2.0 feed. You can leave a response, or trackback from your own site.

3 Responses to Yule and the Months #Yule #Christmas #TrueMeaningOfChristmas