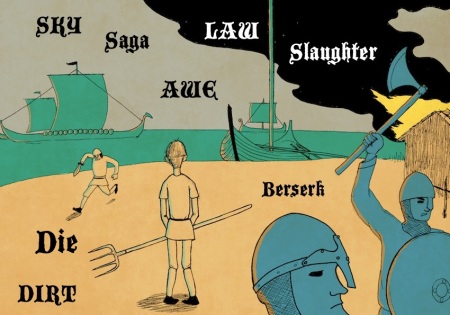 I love the Swedish language. Or rather, Jag älskar det svenska språket. Swedish is a North Germanic language, and therefore  genetically further away from English than German and Dutch (all these three are West Germanic). However, Swedish is actually much easier to learn for English speakers than either German or Dutch. But how can it be more similar despite being more genetically distant? Well, you could be more similar to your best friend Steve than you are to (closely related) Uncle John, after all; same sort of thing in the case of Swedish. Specifically, there are many reasons for Swedish being easier for English speakers to learn than German. The lack of case in both English and Swedish which German retains, is one. Another is that both English and Swedish have borrowed a lot from the same languages including French, Latin, Ancient Greek, and German. And a third reason is the Vikings.

Vikings in the British Isles

The Vikings landed at Lindisfarne in the year 793 with the sole intention of plundering the famed monastery. They continued their yearly raiding for decades. Then in 850 they overwintered in England for the first time. Things were only going one way. 865, and a great army crossed England and settled at York, setting up a Viking kingdom in England. Viking influence spread until 1013 when the Viking king Sweyn was made king of all England. His son, Cnut the Great, took over his kingdom and ruled until his death in 1035 bringing an end to Viking rule in England.

This history has left us with a lot of Norse words.

Words such as sky, slaughter, law, husband, and die. There’s a great little sentence which shows the Norse influence on English, particularly in parts of the north of the UK, and it goes: the barns are laikin’ in the gate, which means ‘the children are playing in the road’; compare the modern Swedish: barnen leker på gatan.

One of my favourite little word-histories concerns THROW. In Old English, the word for THROW was weorpan, that is, warp.  The Norse word cast (as in cast stones or cast a fishing line) came in with the Vikings and effectively replaced warp, the original English word sticking around with an altered meaning. And then another homeborn English word, þrawan ‘throw’, which originally meant ‘to twist, turn, writhe’, rose up and overthrew the Norse borrowing to become the default word, cast itself becoming specialised in meaning. Thus, words for THROW changed from warp to cast to throw. Also note how þrawan and weorpan more-or-less exchanged meanings: the former meant ‘writhe, twist’ and came to mean ‘throw’, the latter meant ‘throw’ and came to mean ‘bend, twist’.

Being the kind of Anglisher I am (see here), I have no real issue taking these historical borrowings into the English language and accepting them as thoroughly English. Indeed, sometimes words are so similar between Norse and Old English, that it’s difficult to know which language they came from.

The following lovely article, The Vikings Are Coming!: 139 Old Norse Words That Invaded The English Language, lists some wonderful and perhaps surprising Norse words. The article is lovely — although I do note that it rather irritatingly keeps the following linguistic myth alive: the words ‘beef’ and ‘mutton’ come from Norman French, whereas ‘cow’ and ‘sheep’ come from English because the aristocracy ate the luxurious food of beef and mutton, whereas the native Saxon peasants merely saw these animals in the field. But asides from helping perpetuate a lovely albeit historically inaccurate story, this article is great. Read it here.

I’ve reproduced the article below just in case babble.com takes this wonderful resource offline at some point. Do check out Babbel, as there is some great stuff on there.

When I say “Old English” what comes to mind? The ornate, hard-to-read script? Reading Beowulf in your high school English class? The kinds of figurative compound nouns – or kennings – like “swan of blood” and “slaughter-dew” that have sustained heavy metal lyrics for decades?

Old English, also known as Anglo-Saxon, was a language spoken by the Angles and the Saxons – the first Germanic tribes to settle the British Isles. They were not the first inhabitants, as any Welsh or Gaelic speaker will tell you, but their language did form the basis for the Angle-ish we speak today. But then why can’t we modern-day English speakers understand Old English? In terms of vocabulary, grammar and syntax, Old English resembles its cousins Dutch and German more than it does modern English. So how did English change so drastically?

The short answer is that the English language changed forever after the Norman invasion brought a new ruling class of French speakers to the British Isles in 1066. French was the language of the nobility for the next 300 years – plenty of time for lots of French words to trickle down to the merchant and peasant classes. For example, the Anglo-Saxons already had words for “sheep” and “cows”, but the Norman aristocracy – who usually only saw these animals on the plate – introduced mouton (mutton) and boeuf (beef). Today, nearly thirty percent of English words come from French.

As a result, modern English is commonly thought of as a West Germanic language with lots of French and, thanks to the church, Latin influence. But this history of English’s development leaves out a very important piece of the linguistic puzzle – Old Norse: the language of the Vikings.

How To Speak Viking

The Old Norse noun víking meant an overseas expedition, and a vikingr was someone who went on one of these expeditions. In the popular imagination, the Vikings were essentially pirates from the fjords of Denmark and Norway who descended on medieval England like a bloodthirsty frat party; they raped, pillaged, murdered, razed villages and then sailed back across the North Sea with the loot.

But the truth is far more nuanced. The earliest Viking activity in England did consist of coastal raids in the early ninth century, but by the 870s the Danes had traded sword for plow and were settled across most of Northern England in an area governed by treaties known as the Danelaw. England even had Danish kings from 1018 to 1042. However, the more successful and longer-lasting Norman conquest in 1066 marked the end of the Viking era and virtually erased Danish influence in all aspects of English culture but one: its effect on the development of the English language.

Traust me, þó (though) it may seem oddi at first, we er still very líkligr to use the same words as the Vikings did in our everyday speech. Þeirra (their) language evolved into the modern-day Scandinavian languages, but þeir (they) also gave English the gift of hundreds of words.

[A note on the letter þ: the Old Norse letter, called thorn, makes the same sound as “th”.]

The most obvious Viking influence on modern English is the word Thursday (Þorsdagr), which you can probably guess means “Thor’s day”.

“Tuesday”, “Wednesday” and “Friday” are sometimes also attributed to the Norse gods Tyr, Odin and Freya, respectively; but the days are actually named for the Anglo-Saxon equivalents of these gods, Tiw, Wodan and Friga. The similarity of these names points to the common ancestry of the various Germanic tribes in prehistoric northern Europe – centuries before their descendants clashed on England’s shores.

If the Vikings are famous for one thing, it’s their obsession with war. They didn’t just bring death and destruction to England in the Middle Ages, they brought really cool words for death and destruction. They were certainly a rough bunch. Just look at a Viking the rangr way, and he might þrysta (thrust) a knifr into your skulle.

But life in the Danelaw wasn’t all murder and mayhem. Ironically, these savage berserkers also gave us words that are central to our “civilized” culture:

Some words associated with hunting and trapping also come from Old Norse. Sleuth now means “detective”, but the original slóth meant “trail” or “track”. Snare, on the other hand, retains the original meaning of O.N. snara.

Old Norse is good at describing bleikr landscapes and weather. This was especially useful in the Vikings’ adopted northern England, where flatr or rogg (rugged) terrain can be shrouded in fok, and oppressed by gustr of wind and lagr (low) ský (clouds).

Much of the Danelaw bordered swamps and alluvial plains, so it’s no surprise that many Norse words for dirty, mucky things survive in English:

The Norse Legacy in English

Thanks to the cross-cultural fermentation that occured in the Danelaw – and later when England was temporarily absorbed into Canute the Great’s North Sea Kingdom – the English language is much closer to that of its Scandinavian neighbors than many acknowledge. By the time that the Norman conquest brought the irreversible influence of French, Old English had already been transformed beyond its Anglo-Saxon roots.

This is still in evidence today; modern English grammar and syntax are more similar to modern Scandinavian languages than to Old English. This suggests that Old Norse didn’t just introduce new words, but influenced how the Anglo-Saxons constructed their sentences. Some linguists even claim that English should be reclassified as a North Germanic language (along with Danish, Norwegian and Swedish), rather than a West Germanic language (with Dutch and German). The Viking influence may be most apparent in the Yorkshire dialect, which uses even more Norse words in daily speech than standard English does.

English is probably too much of a hybrid to ever neatly classify, but its Old Norse rót is clearly there among the tangle of Anglo-Saxon, French and Latin roots. The language of the Vikings may have become subdued over the centuries, but make no mistaka about it – from byrðr (birth) undtil we deyja (die) – Norse’s raw energy simmers under the surface of everything we say.

This entry was posted on Tuesday, July 21st, 2015 at 4:09 pm and is filed under vikings. You can follow any responses to this entry through the RSS 2.0 feed. You can leave a response, or trackback from your own site.